The Leadership Louisville Center is dedicated to the leadership legacy of Bill Street.

On March 27, the Leadership Louisville Center opened the doors of its new world-class Leadership Center on 707 W. Main St., a Center that builds our region’s leaders, and creates a convening place for the advancement of our community.  The new location allows the Center to leverage its role as a national best practice in the realm of community leadership for broader reach and impact, attracting visitors to Louisville for high quality leadership and talent development programming. 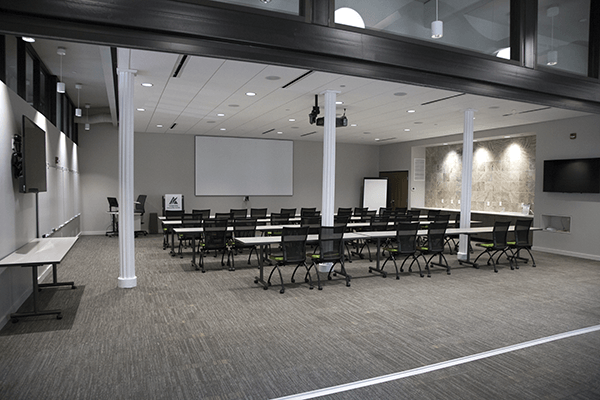 The Center was dedicated to the leadership legacy of Bill Street, former president of Brown-Forman Corporation and long-time supporter of Leadership Louisville. A highlight of the new facility is the Ed Glasscock Leadership Development Classroom, which features natural light, modern technology and unique glass architectural features, and will host all future Leadership Green Room courses. Additionally, the PNC Alumni Lounge includes gathering and café space with views of the Ohio River. Sandra Frazier received kudos from the campaign steering committee and was recognized with the naming of the executive conference room.
See more photos

For nearly four decades, the Leadership Louisville Center has been committed to growing the pillars of our community, and has established itself as a critical institution for cultivating business and civic leaders, creating a lifelong network of people who have a heart for our community. Over 7,000 individuals, many of our region’s most active and influential leaders, are alumni of the civic programs: Leadership Louisville, Focus Louisville, Bingham Fellows, Ignite Louisville and Encore Louisville. The Leadership Green Room was launched in 2015 and serves as the training and talent development arm of the Center, expanding the resources available to the region’s business community and employee base. The Center’s new world-class facility is designed to build our region’s leaders, and also attract others from across the country to attend leadership programs in Louisville. The community convening space will better promote an exchange of ideas and collaboration as well as provide the Center with the classroom space and modern technology needed to further its mission.

The Destination: LEADERSHIP campaign launched in fall of 2016 with a $3 million fundraising goal to secure the purchase and renovations of approximately 10,000 square feet of office space for the Center’s new home at 707 West Main Street.  Leadership investors include:

The Center’s search for a new location began in January 2016 with goals to have great visibility, easy access for members and open and collaborative meeting and classroom space for members and staff.  After months of evaluation, 707 West Main Street, which is a two-story office condominium unit containing 10,000 square feet located in a historic building, was determined to be the best fit for the organization. It is a rare opportunity to find space on a prime corner of the downtown with street-level presence, windows on three sides with views of the Ohio River and Fort Nelson Park, access to green space for outdoor training sessions and close proximity to hotels and after-hours activities for out-of-town participants. Partners on the project include Miranda Construction, Swope Design and K. Norman Berry & Associates.

Phase two of the project will reclaim an overlooked and underutilized green space behind the building to create a new park plaza.  The design for the space is inspired by the award winning High Line park in New York.