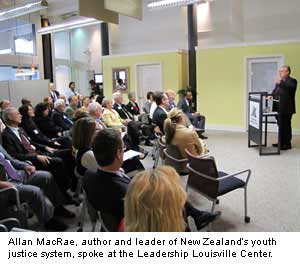 Louisville’s juvenile court system launched a pilot program in restorative justice in early 2011, modeled off a hugely successful program in New Zealand and other sites in the United States. This effort began in the fall of 2009.

MacRae described restorative justice to the crowd as a victim-centered response to crime. It allows the victim, the offender, their families, and representatives of the community to develop a plan to “right the wrong”. The results in New Zealand were dramatic – after implementing the program, the juvenile cases processed through the court were reduced by nearly 70%, with over 90% reduction in recidivism. This allowed for the closure of several juvenile institutions across New Zealand.

Sometimes all it takes to move forward is the right connection

New Zealand’s remarkable results drew the rapt attention of youth advocates and community leaders in the Leadership Louisville Center audience. One of those leaders was Jefferson County Attorney, Mike O’Connell. According to Tom Williams, “Mike O’Connell is the gatekeeper in Louisville when it comes to judicial issues. Having him on board with this initiative was huge.”

Ssince the pilot program in restorative justice began, Leadership Louisville classes have spent part of a program day learning about this initiative. Several Leadership Louisville graduates were impressed with the program early on and  stepped up to help lead the effort. Michelle Griffin (BF ’12, LL ’11) of Humana Military, wrote a business plan for Restorative Justice Louisville, a nonprofit organization formed to support the program. Chris Ward (LL ’12, IL ’10) of DMLO, Todd Brown (LL ’12) of Dow Chemical and Lee Webb (LL ’12) (now deceased) of Stoll Keenon Ogden joined the board of directors. Tori Murden McClure (LL ’12) of Spalding University arranged a partnership and now Restorative Justice Louisville’s offices are hosted on the Spalding University campus. Today several Leadership Louisville program graduates are members of the RJL board of directors.

Who We Are callouts

Know someone who is ready to step up as a leader?