The Bingham Fellows as Social Entrepreneurs

The Bingham Fellows serve as examples of social entrepreneurship in the region. Social entrepreneurs are people or organizations that have both a vision and the ability to assemble the resources required to implement that vision to address obvious social needs.

For 20 years Bingham Fellows projects, including the homebuilding efforts in downtown Louisville and the building of a new community center, have demonstrated both imagination and practical gathering of critical resources that are needed to effect social change.

Snapshots of some key accomplishments of Bingham Fellows classes 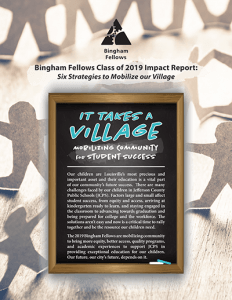 It takes a village – mobilizing community for student success – 2019

The initiatives they developed address challenges of homeless students, better support preschoolers and middle-school students, and make better use of out of school time.  Learn more about the work of the 2019 Bingham Fellows 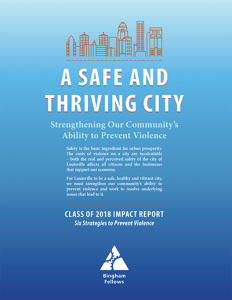 Safety is the basic ingredient for urban prosperity. The costs of violence on a city are incalculable – both the real and perceived safety of the city of Louisville affects all citizens and the businesses that support our economy.

For Louisville to be a safe, healthy and vibrant city, we must strengthen our community’s ability to prevent violence and work to resolve underlying issues that lead to it. The Bingham Fellows launched six strategies to address root causes of violence. Learn more about the work of the 2018 Bingham Fellows 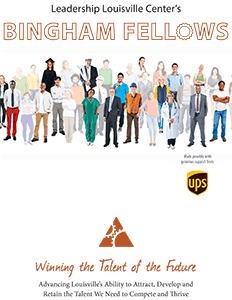 Louisville, as well as the rest of the U.S., has seen a major shift in its workforce over the last 30 years. Manufacturing jobs have declined while service and technical jobs have increased, and the skills needed to fill these jobs have changed as well. The Greater Louisville area has over 35,000 open jobs, yet Louisville’s progress in attracting and retaining people is nearly at a standstill. Check out the five initiatives the Bingham Fellows launched to address these critical workforce challenges. The initiatives range from helping at-risk high school students continue their education, to high-tech job training, to creating an ambassador program to provide local connections for transplants to the area. Learn more about the work of the 2017 Bingham Fellows 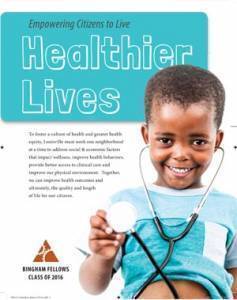 The 2016 Bingham Fellows were challenged to help Louisville raise its health rankings, and ultimately increase the length and quality of life for all citizens. This was a significant challenge because Louisville is regularly rated as one of the unhealthiest cities in the United States by many metrics used to measure wellness. Improving the health of citizens is a complex but critical issue. The five innovative projects they launched began one neighborhood at a time, and touch all factors that impact health, including social and economic factors, health behaviors, clinical care and physical environment. Learn more about the work of the 2016 Bingham Fellows 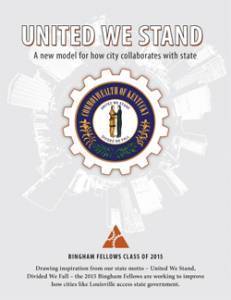 United we stand: A new model for how city collaborates with state – 2015

The urban-rural divide has become a national issue of increasing importance, but it’s one that Kentucky and Louisville have been struggling with for centuries. The 2015 Bingham Fellows class was charged with starting the process of uniting the Commonwealth for the betterment of all. The class studied the issue through in-depth discussions on the political landscape in Kentucky, candid conversations with current and past civic leaders, and researching successes in other states. They developed four strategies that range from the macro level with broad, statewide considerations, to the micro, grassroots level. Their Cafe Louie initiative is going strong years later, with state and local representatives holding Q&A gatherings with constituents each Saturday at local library branches during the Kentucky legislative session.  Learn more about the work of the 2015 Bingham Fellows. 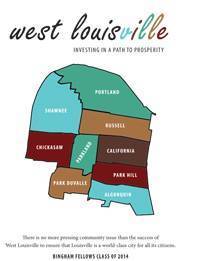 The 2014 Bingham Fellows narrowed their focus to projects which address three key elements of a thriving community: early childhood education, employment and the built environment. OneWest was an initiative of this class. OneWest is a non-profit corporation that will establish new pathways to public and private capital – in Louisville Metro and beyond – in an effort to stimulate economic development and revitalization in an area key to the city’s overall success.  Learn more about the work of the 2014 Bingham Fellows. 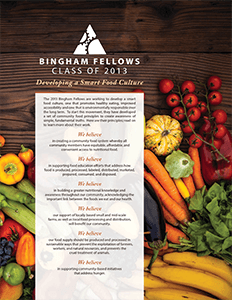 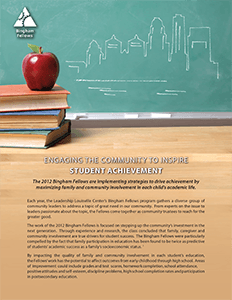 The 2012 Bingham Fellows were tasked with taking a leadership role in engaging parents, families and the business community in the education of our next generation.To broaden resources for family and caregiver involvement, the Bingham Fellows concluded that there isn’t one single approach – solutions need to come from multiple angles and the whole community has a role to play. Their comprehensive approach is focused on the building blocks of school, community and families and they developed solutions to address each of these elements. Learn more about the work of the 2012 Bingham Fellows.

To create and execute an infrastructure master vision for Louisville, the 2011 Bingham Fellows developed a three-pronged approach. Their first step was to ensure that an infrastructure plan was aligned with economic development strategy and job creation. They secured funding from IBM Global Business Services to assess Louisville’s competitiveness in regard to infrastructure, particularly in regard to logistics.

The next step is developing a long-term strategic plan modeled on the groundbreaking PlaNYC undertaken by Mayor Michael Bloomberg. The Bingham Fellows created Plan Louie, an integrated vision for infrastructure investment which they delivered to the mayor in December of 2011. At the Leadership Louisville Luncheon in 2012, Mayor Fischer announced his plan to develop a 25-year vision for Louisville. Learn more at www.visionlouisville.com.

The new approach in infrastructure decision-making will happen through the creation of an Infrastructure Investment Board. This framework will ensure infrastructure investments generate significant “return” for the community. The board would provide elected officials with advisory recommendations based on objective data and analysis, as opposed to the current ad hoc model. Learn more about the work of the 2011 Bingham Fellows.

Nearly 300 organizations in Louisville have sustainability and greening in their missions. The Fellows worked to support their efforts through information and idea sharing as well as the creation of an umbrella organization to provide connections among the organizations.

After studying other cities and efforts already in place in Louisville, the Fellows produced recommendations for changes to Louisville’s approach to sustainability on building projects. These recommendations included regulatory changes to encourage green building practices that were accepted and passed by Metro Council in July 2011. In 2012, a member of this Bingham Fellows class, Maria Koetter, was named the city’s first Sustainability Director. In January 2013, the Mayor’s Office released it’s draft of the Sustain Louisville plan. (Note: Page 6 of the Sustain Louisville plan details the 2010 Bingham Fellows work.)

Add It Up to support the Math and Science initiatives – 2007

The 2007 Bingham Fellows created activities and opportunities to engage the community in support of the $25 million GE-Jefferson County Public Schools (JCPS) Math and Science Initiative. The Bingham Fellows received a $50,000 grant from the UPS Foundation to provide seed money for their projects.

The Bingham Fellows culminating project was the Add it Up Challenge! weekend which was designed to raise awareness of the importance of math and science education. Over that weekend the Bingham Fellows held the Add It Up! 5k Run downtown and took over the Louisville Bats’ Game later that evening. Overall, their projects resulted in approximately 18.5 million impressions.

The Bingham Fellows activities have been documented in a community leadership tool kit that public school systems in other cities, such as Cincinnati and Atlanta, can use to support the GE education grants.

The Bingham Fellows traveled to Northern Kentucky to examine how the counties and cities in that region were able to cooperate so effectively to unite geographic boundaries. Upon returning to Louisville, core members of the group formed the Regional Leadership Coalition (RLC).

The RLC’s mission was to build ties throughout the area with the goal of creating a cohesive region that might be more competitive economically.

Today, the RLC has evolved into a partnership between Greater Louisville Inc. and the newly formed One Southern Indiana. Accelerating the progress of the Ohio River Bridges project remains a major RLC priority.

In April of 2012, the RLC rebranded itself as the Kentucky Indiana Exchange. The Kentucky Indiana Exchange (KIX) is “a bi-state, non-partisan organization of regional leaders focused on cultivating regional thinking and action around shared opportunities and mutual challenges. … KIX does this by connecting people and organizations throughout the region as well as advocating, supporting and incubating key regional initiatives.”

As part of their research, the Fellows decided to assemble arts leaders to discuss their common challenges and opportunities.  As a result of this initial gathering, the fledgling Arts and Cultural Attractions Council (ACA) was bolstered by the attention that the Bingham Fellows brought to the issue. The purpose of the ACA is to help regional arts groups work together to identify common goals and pursue projects and events that accomplish their common objectives.

During the course of community meetings with Smoketown residents, class members became concerned about vandalism at Presbyterian Community Center (PCC).  Their research on urban areas pointed out that vandalism can intensify crime in neighborhoods and may lead to more serious criminal transgressions.

One of the Bingham Fellows, attorney Grover Potts, made a site visit to PCC to assess the situation and was taken aback by the neglected state of the building. Potts had a vision for an improved facility for PCC that could serve as a cornerstone of Smoketown. It could provide essential services and support for residents while simultaneously helping to reduce crime in the area. Potts got the class to support establishing a new building for the PCC saying, “It provided social, economic, health-related and physical activities for children and seniors; it was the place where anybody with a problem would to find some relief.”

Not surprisingly, the main issue in building a new community center was money.  The Bingham Fellows secured a gift of $1 million from the Brown Foundation, as well as other gifts, both large and small, for a grand total of $4 million. The new Presbyterian Community Center opened officially in July 2002.

Changing the way we think about garbage – 1992

It’s difficult to remember a time when recycling wasn’t a part of our daily lives.  But as recently as 1991, Louisville was facing literally a growing crisis in solid waste. Landfill space in the county and region was being exhausted and recycling regulations were being rolled out.  The Fellows outlined a broadly focused educational campaign to provide information to schools, the business community, government and the community as a whole. To implement the new regulations, the Bingham Fellows helped to develop a board whose purpose was to direct the management of solid waste. The new solid waste authority, formed through state legislation, was the board of directors for the Louisville/Jefferson County Waste Management District, also known as the 109 Board, which still serves Louisville Metro  today.

Following their research, the class identified a number of public and private sector groups involved in promoting and developing housing for low-income populations. The Fellows quickly saw that these disparate groups could have a greater impact if their resources and efforts were better coordinated. In 1989, the Bingham Fellows proposed forming The Housing Partnership Inc., which brought together bankers, builders, government officials and civic leaders to build affordable housing. Today, The Housing Partnership is an entrepreneurial corporation that provides technical consultation and assistance for housing development.  The Partnership helps with site management of land development and construction and assists with collaborative financing of community development projects.

Who We Are callouts

Know someone who is ready to step up as a leader?