The Ignite Louisville day at Fort Knox was filled with multiple gold nuggets on leadership, but three correlating philosophies emerged that will help us grow as better leaders in our community.

Throughout the day, multiple officers touted one of Stephen Covey’s 7 Habits of Highly Effective People: “Begin with the end in mind.” All too often, we focus on a problem and look at the first/easiest thing we can do to alleviate it, which is different than what we would do if we first focused on the end goal. If you start with your attention on the desired outcome, you can then focus on the specific steps needed to get there, which leads to efficiency and effectiveness. 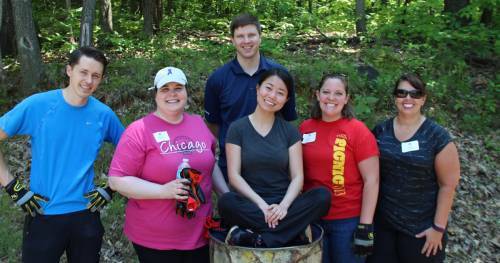 Major Simon Powelson spoke about the “Military Problem Solving Method”, and the key takeaway was the necessity of continual assessment of a situation. It may seem like a no-brainer, but think about situations and projects where you assessed the circumstances initially and then implemented a plan without assessment while it’s being carried out.  Failure to continuously evaluate can lead to inefficient or inept solutions. Constant assessment during the planning, preparing, and execution phases leads to optimization of results, a.k.a. “Mission accomplished.”

Commanding General for U.S. Army Recruiting Command, Major General Jeffrey Snow, shared his “10 Thoughts on Leadership.” One of those thoughts was to “foster a positive approach to those you lead, even when the times are tough and the hours are long.”  He acknowledged that maintaining positivity can be difficult but the effort is worth it, because “nobody wants to work for a sourpuss.”

These three leadership philosophies relate to the Army’s fundamental “One-Third, Two-Thirds Rule” for how to approach a project.  Use no more than one-third of the given length of time to plan, leaving two-thirds of the available time to spend carrying out the “mission.”  Spending too much time planning runs the risk of not having enough time to implement the strategies, and over-planning may hinder the flexibility to modify the course of action, should adaptation become necessary. The best project management strategy begins with the end in mind when strategizing the steps to get to the target outcome and then leaves enough time to implement the plan, with continual assessment of the course of action.  A positive approach will encourage others to be engaged and committed, “even when the times are tough and the hours are long.”

Regarding the goal of learning leadership skills during our day at Fort Knox, I would say, “Mission Accomplished.”

Learn more about Ignite Louisville – applications for the next two classes will be open June 27 – August 5, 2016.