Having worked in the criminal justice system early in my career, I knew that January’s program was going to be interesting.  For every program day we have had so far, I always learned something new and was astounded by some of the facts about my community.  Looking forward to our criminal justice day, I wondered whether I was going to be surprised by anything I learned. The answer is YES!

I have known for quite some time that a lot of criminal defendants suffer from mental health issues and substance abuse issues, but the numbers are staggering.  According to our fellow classmate Mark Bolton, approximately 80% of Jefferson County Corrections inmates have substance abuse issues and approximately 25% have mental health issues.  Wow!    No wonder our criminal court dockets are so busy.  No wonder our jail is overcrowded.  It is a wonder that our community and politicians don’t seem to be too concerned about it. 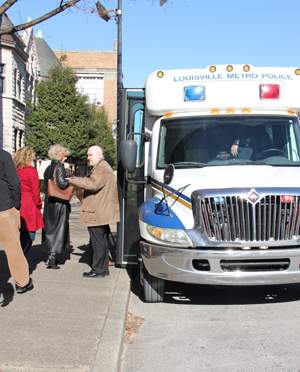 The Leadership Louisville Class of 2014 rode the LMPD bus to jail (for a tour) during the class’s Law and Order day.

If they aren’t concerned about our adult criminal defendant population, our community and politicians should be concerned about our children.  Parents who are in and out of the criminal justice system are less likely to be home taking care of their kids.  With mental health issues and substance abuse issues, they may be unable or ill-equipped to provide a healthy, stable, supportive home for a child.  Some of those children are the same ones who are starting school unprepared, who come to school hungry, or who are more worried about survival outside of school than learning while in school.  And we already learned in December how all of these education problems translate into more criminal defendants as our children become adults.

It’s cheaper to fund substance abuse prevention programs and mental health initiatives now compared to paying for more jails, prisons, hospital bills, etc. in the future.  If we don’t take action toward prevention, we are only hurting ourselves, our community, and our future generations.  There are some wonderful programs in place for prevention.  Talking with the women and men in our jail’s detox dorms and substance abuse program was enlightening and encouraging.  The mental health initiative to target help specifically for our jail’s most costly and repeat offenders was such a simple, yet brilliant, idea.

The stories from the Restorative Justice Project were uplifting and gave me hope for our juvenile justice program.  The only problem is that these programs are woefully underfunded and inadequate to address the full need in our community.

Government budgets are becoming leaner all the time, and budget cuts for programs are more likely to happen than not.  Non-profits do not have the resources to handle the ever-growing population that needs help, nor can non-profits afford to pick up where the government is choosing to leave off.  There just isn’t enough help out there.  If we can’t convince our community and legislators to be proactive in addressing substance abuse and mental health problems of our fellow citizens, surely we can help them realize that, if nothing else, we need to help the children — the next generation.

During this legislative session, our state senate is trying to address some of the problems around heroin abuse.  On January 16th, Mike Wynn wrote a Courier-Journal article about Senate Bill 5, stating that it “would require high-volume drug dealers to serve at least half of their prison sentences, boost funding for anti-drug education and call for the state’s Medicaid program to cover more substance-abuse treatment options.”  More details about this Kentucky Senate bill can be found at the following web link:  http://www.lrc.ky.gov/record/14RS/SB5.htm

So, what did I learn from our January program that amazed me the most?  It wasn’t statistics and facts about the system.  It was what I learned about myself.  As a former prosecutor, I already knew so much about issues and problems within and around our community’s criminal justice system, yet I’ve done nothing to tackle those issues or to educate others who are in a position to tackle them.  Shame on me!  I’m challenging myself to do something about that this year.  And, I challenge our Leadership Louisville class to do the same.  No excuses!