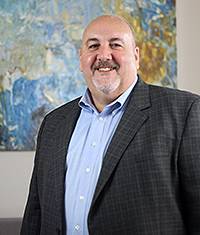 Tony is the Director of Finance and Administration for the Leadership Louisville Center.  In his role, Tony has responsibility for the financial operations of the center along with human resources, information technology, and facilities management.

Tony has had a long and diverse career in finance.  He came to the Leadership Louisville Center after having spent the past nine years as a senior financial executive in the retail grocery sector with three food cooperatives in New Hampshire, Indiana and, most recently California.  Prior to that, Tony’s career encompassed several diverse roles, including nearly a decade as an expatriate in Germany, Switzerland, and France working in corporate finance for General Motors. Tony started his career as a commercial banker.

Tony received his MBA from Indiana University and has an undergraduate degree in business administration from the University of Iowa. Tony lives with his wife in Louisville and spends his spare time visiting his daughter who lives in Berlin, Germany and his son, who is currently a student in Montana.