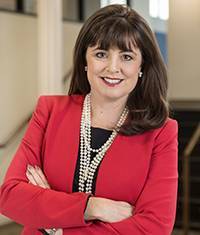 Cynthia Knapek is president of the Leadership Louisville Center.

In 2012, Cynthia was named President of the Leadership Louisville Center. The Center is a leader in civic engagement and leadership development whose mission is to inspire and equip leaders to BE BETTER and DO BETTER. In 2020, Cynthia was named one of the Most Admired CEO’s by Business First. Cynthia is particularly proud that the work the Center has done to foster inclusivity and embrace diversity was recognized with the 2016 Champion of Diversity Award from the Urban League.

She previously served as the national Chair of the board for the Association of Leadership Programs. ALP ‘s mission is to recognize excellence, foster innovation, and build networks for community leadership programs across the country.

She has a master’s degree from the University of Louisville as well as several certifications in leadership training and organizational development.