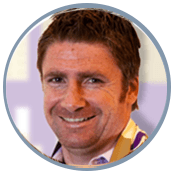 Building a Team of Champions

As a former professional soccer player and coach, James O’Connor will share an inside look at Louisville City FC’s leadership and talent development model. Gain insight on how to build a winning team, the importance of creating the right culture, and how to turn hardsheip into opportunity for growth. All from a masterful coach who led his team to win the 2017 USL Championship, in just his third year of coaching.

James’ soccer story goes back to 1996-2003 when he played for the English side of Stoke City where he tallied 16 goals and 176 appearances. He also played for West Bromwich Albion, Burnley and Sheffield Wednesday in England before making his way to Orlando City SC, where he ended his career as a player. Before O’Connor was named head coach of LouCity, he won both regular-season and playoff titles with Orlando City.

In 2017, he was one of five coaches in the running for USL Coach of the Year. According to the USL website, “…James O’Connor, has managed his roster magnificently to bring the best out of players and keep Louisville among the league’s elite for a third consecutive season. O’Connor’s attention to detail on the field and in practice has been key to keeping the club’s standard high.”