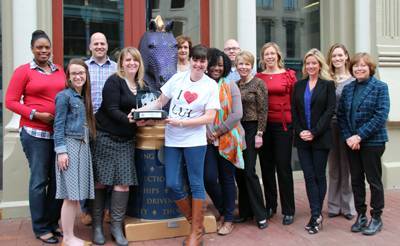 “Over the years, the Leadership Louisville Center has exposed thousands to parts of the community that are largely minority, plagued by poverty and are often overlooked by those within the business community,” said Sadiqa Reynolds, president of the LUL.  “They have created forums for members of our community to have a honest and constructive conversation about race and, collectively, how we can all work together to make our entire community better and stronger.”

Through the expansion of its Ignite Louisville program for young professionals and the new Leadership Green Room offering talent development workshops, the Leadership Louisville Center is also working with the business community to help companies develop workforces that are reflective of the city’s diversity at all levels of the organization. This work supports the Center’s mission to grow and connect a diverse network of leaders who serve as catalysts for building a world class community.

“As businesses and organizations work to fill key senior roles, LUL and the Leadership Louisville Center have a shared focus and commitment to helping our business partners identify a diverse pool of candidates who are prepared to serve in leadership positions and help their respective employers accomplish their short and long term business goals,” said Reynolds.

“Having more companies with a workforce that reflects the community and customers they serve we are also helping to ensure that all populations within our city have greater access to many of the opportunities that have traditionally been enjoyed by a few groups.”

The Leadership Louisville Center is honored to receive this award and believes it is yet another confirmation that the programs and services it provides are serving as a catalyst for change.

“This award is incredibly gratifying to our organization and board of directors,” said Cynthia Knapek, president of the Leadership Louisville Center.  “Helping our participants embrace all of our community and its diversity has always been part of what we do, but in recent years, a key strategic focus of the Center has been to increase the diversity of our class participants. We’re very honored to receive this recognition and see this as evidence that our efforts to improve access to our leadership building programs is working.”

The Champion of Diversity was established by LUL several years ago to recognizes outstanding achievement by an individual, business or organization in the promotion of diversity.   The award is named after Arthur “Art” Walters, who served as Executive Director of LUL from 1970-1987.  Past recipients of the award include former Kentucky Governor Steve Beshear, the University of Louisville and William “Bill” Summers IV.