The 22nd class of Leadership Louisville Center’s Ignite Louisville program graduated on October 23 following a day of presentations to a panel of esteemed judges. The six Community Acceleration Teams put their work for local nonprofits on display in hopes of winning the Ignite Louisville Challenge and earning additional funds for the agency they worked to assist. The team working with Sleep in Heavenly Peace-Derby City (SHP) was selected as the winner of the challenge and will receive the $1,500 prize made possible by the Leadership Louisville Center. While one team was selected as the winner, all six nonprofit agencies received significant support, with the six teams contributing over 2,500 hours of service and providing over $187,000 in value to the nonprofit agencies. 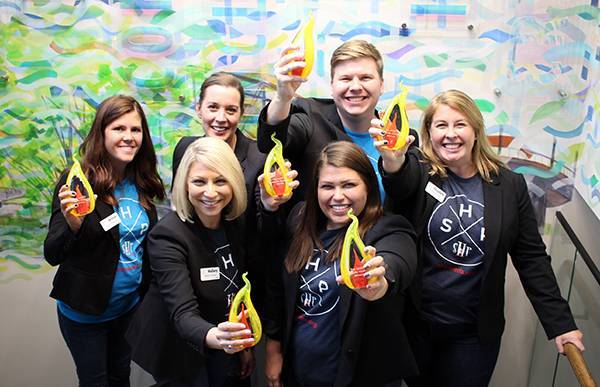 This 100% volunteer-based organization builds beds for children in Louisville and surrounding communities who do not have a bed of their own. Sleep in Heavenly Peace-Derby City (SHP) was formed in 2018 and recognizes the importance of having a bed for the growth, development, mental health, and academic success of children and teenagers. The team collaborated with SHP-Derby City to build their local brand, grow awareness on social media, increase fundraising, and develop corporate partnerships. The five-month collaboration resulted in an increase of three times the media presence, engagement of 47 participants and 13 organizations in the inaugural golf scramble fundraiser, and the second-ever corporate-sponsored bed build. The team raised over $29,000 which was allocated to purchase a trailer to transport build equipment and deliver beds, purchase additional tools, and fund the building of more than 100 beds in the future. Key to the long-term sustainability of this organization, a multi-disciplined advisory committee was established to provide guidance for future fundraising, outreach, media relations, and partnerships.

Kyle Fogg, Chapter Co-President, Sleep in Heavenly Peace, had this to say:

“The Ignite Louisville team has been amazing to work with. They have done more in six months for Sleep in Heavenly Peace than our team was able to do over the past year. The Ignite team has opened more doors for SHP than we ever thought possible. They have made us excited about the future of our organization and about the impact we will be able to have on children in our community.”

Doctors and Lawyers for Kids, working with the ‘Louisville Luminaries’ 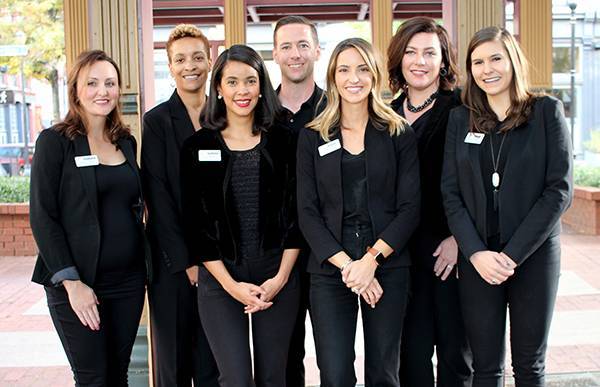 Doctors & Lawyers for Kids (DLK) “ask” was to increase visibility and brand recognition in the community and increase funding through the creation of a promotional video. Upon embarking on the project, the team realized that in order to achieve the goals of increased funding and brand visibility, the organization needed much more than a video. The team rebuilt the DLK website, created a 2018 annual report and template for future reports, met with potential funders to learn how the organization could competitively apply for funding, and created a “Roadmap for Sustainability” document to ensure future success. They completed a board training to share best practices for organizational development and fundraising. The value of the project to the organization is conservatively estimated at $19,000 dollars, with over 350 hours of time volunteered by the team + at least $10,700 value-added for the video donated by Videobred.

Megan Metcalf, Legal Director, Doctors & Lawyers for Kids, had this to say:

“Our Ignite team has re-energized and transformed our organization.  Their attention to detail started from the foundation, with a reimagination of our mission statement, all the way to developing a sustainability strategy that will enable us to effectively communicate our vital work with institutional and individual funders in the 21st century through new (or improved) use of multiple media platforms.” 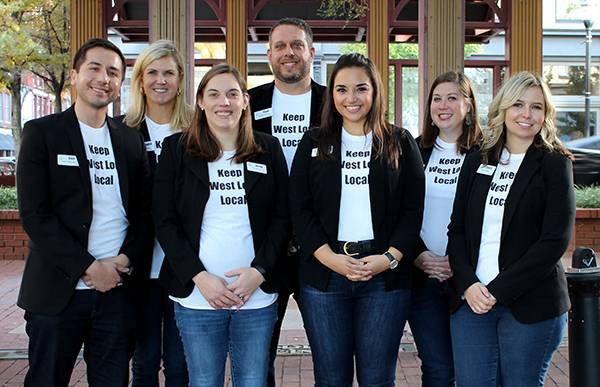 LIBA’s goal is to support the growth of local, independent businesses and they recognized that their membership does not represent all areas of Louisville. The team was challenged to help expand LIBA’s footprint in the west end by developing a formal mentorship program for current and potential independent business owners. After many conversations with stakeholders in West Louisville, the team learned that they needed to empower west end businesses to help each other and set out to design events that will enable organic mentor relationships to form. The team also produced a resource directory that summarizes resources available for local, independent businesses. The team first planned and hosted an asset mapping roundtable with key West Louisville stakeholders followed by the inaugural session of the LIBA Presents West Louisville Business Trailblazer series. This event series will continue into 2020 and will showcase current business owners, arm business owners and aspiring owners with tools to establish their businesses, and allow for networking to build organic mentor relationships. These deliverables have expanded LIBA’s footprint in west Louisville and will ultimately allow more local businesses to start and grow in the area.

“This team has been amazing! Their collective effort has increased our impact in west Louisville via meaningful events, prospective member engagement, data collection and more! Though the work was not easy for the team, they stepped up with consistent positive attitudes, creativity, and intention. As a result, LIBA has a legacy event series and data that will be useful heading into 2020 and beyond. West Louisville business owners and the entire community has benefitted from their efforts.”

The partnership with USA Cares, an organization that provides crisis assistance to military veterans and their families, was focused on increasing awareness, outreach, and sustainability for the organization. The team brought in three major components that culminated in over $44,000 actual value and a clear structure for growth and sustainability in the future. The team provided a complete financial analysis and a long-term fundraising plan to the organization. Also, the team provided a logo redesign and new marketing materials to help USA Cares clearly convey their mission to new donors and volunteers. The third major component was revamping the structure and communication with local chapters and included a plan of action for future fundraising. Additionally, the team held events at Humana and Jim Beam reaching 385 new individuals across 31 states. The team also created a Dollars for Dough program with Papa John’s and held a raffle for a distillery tour that raised $1,500. Further benefits include providing executive training for the CEO, new signage worth $4,000, and the chance to work with an Encore Louisville team in 2020. Over 300 volunteer hours were dedicated to the project.

“USA Cares cannot say enough positive things about our experience with Ignite Louisville. The team we were assigned quickly embraced us and our mission, and we welcomed their energy and new ideas. This talented group of young professionals provided USA Cares with long-term solutions, step-by-step guides, and other support so we could better serve our mission. This experience has bonded us together as friends and partners and we look forward to working with them in the future as we continue to grow support for our mission.” 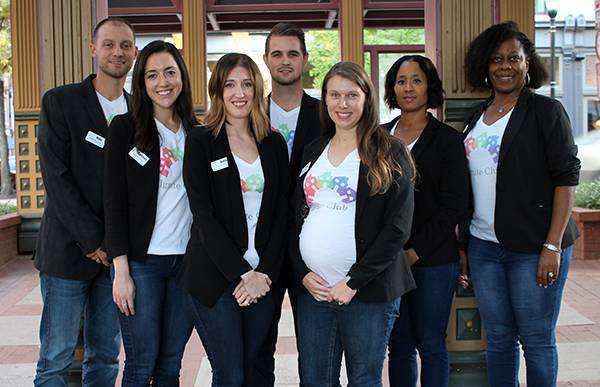 Wellspring promotes mental health recovery and supports individuals in building healthy and hopeful lives. The team’s project addressed the organization’s lack of community awareness. The team investigated the benefits of establishing a supplemental board of youthful visionaries who could guide the organization into the future. By project end, the team submitted recommendations and a proposed structure, governance, and membership for the youth board. The team also developed a new website for the organization, bolstering the Wellspring brand and making it more accessible to the community they serve. Other related events to build awareness included a Dine-to-Donate event, National Mental Health Awareness Day, and a trivia night to target a younger demographic. The team also received a generous discount for the services of local filmmaker Marvin Young, who produced a series of short videos Wellspring now uses to share its message with the community. Over 450 hours were dedicated to the project, with a value delivered to the organization yet to be fully realized.

Kim Johnson, Development Director of Wellspring, had this to say:

“The Ignite Louisville team brought enthusiasm, vision, and knowledge to address challenges Wellspring has faced for years. Their solutions included an updated website that we otherwise did not have the expertise or budget to accomplish on our own; researching, outlining and establishing roots for how an Ambassador Board; coordinating public events that helped us reach new audiences, and a PSA video that we can use to spread the word about our mission and programs. In a few short months, the Ignite Club members created momentum and elements that will benefit Wellspring and the Louisville community for years to come.” 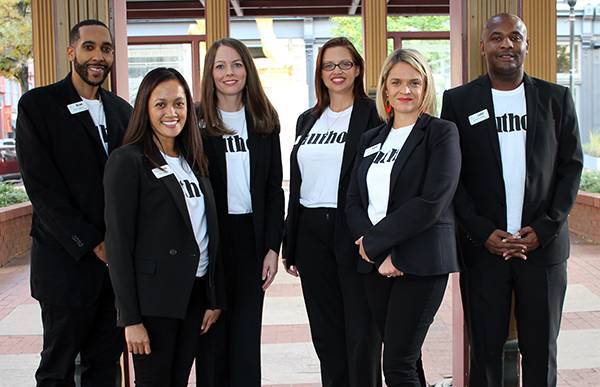 Young Authors Greenhouse (YAG) is a literacy nonprofit in the Portland neighborhood that inspires students to recognize the power of their voices through writing. To support YAG’s ambitious growth plan, the team created strategies to help address needs in development, volunteer sourcing, brand awareness, facilities, event planning, and data management. They developed partnerships with the Kentucky Retired Teachers Association and the University of Louisville to provide YAG access to thousands of potential experienced volunteers. They also generated a year-long cycle of grant opportunities and drove YAG’s first-year participation in the Give for Good Louisville program, where they ranked #44 with $34,295 raised. Shortly after, the team coordinated YAG’s inaugural fundraiser, YAG Fest!, connecting them with new community partners and raising over $6,000 in cash and in-kind donations. The team also helped grow YAG’s community presence by connecting them with local groups such as the Portland Public Library, Salesforce for data management needs, and news media outlets, which resulted in features on WHAS and WLKY. The team capped its five-month engagement with Young Authors Greenhouse by helping plan its October 12th ribbon-cutting ceremony that officially opened its writing center and storefront.

Jeanette Bahouth, Executive Director of Young Authors Greenhouse, had this to say:

“As a start-up nonprofit with 2.5 staff members, having an Ignite Louisville team helped us maintain momentum and grow in preparation for our writing center’s official ribbon cutting. They noticed areas beyond our initial project ask where they could apply their unique expertise and they jumped right in – from making our cramped office space usable to teaching us how to organize a silent auction, to creating a mission video, and more – our reach became wider and more abundant thanks to their help. We are honored to have had the opportunity to get to know them and are so grateful for their commitment to our organization and our young writers.”

Nonprofits, learn how you can benefit from Leadership Louisville Center programs. The next opportunity to submit a proposal to work with an Ignite Louisville team will be in Summer 2020.