The 20th class of the Leadership Louisville Center’s Ignite Louisville program graduated on October 10, 2018, following a day of presentations to a panel of esteemed judges. The six teams put their work for local nonprofits on display in hopes of winning the Ignite Louisville Challenge and earning additional funds for the agency they worked to assist.  The River City Avengers team working with Inside the Lines Training was selected as the winner of the challenge and will receive the $1,500 prize.

While one team was selected as the winner, all six nonprofit agencies received significant support, with the six teams contributing over 5,500 hours of service and providing over $240,000 in value to the nonprofit agencies.

Team River City Avengers partnered with Inside The Lines Training, Inc., an academic enrichment and athletic training program for student-athletes age 6-18 years old. The initial “ask” was to create a business model, however, the team quickly realized establishing a framework for sustainability took priority. They began by helping find a permanent location for the organization, which was critical to its success. They developed a program model to narrow the scope and vision for the organization. They created a financial report, which included a budget for the future. The budget allotted the hiring of six tutors and two trainers. A list of new donors and volunteers was organized into a Customer Relationship Management (CRM) tool. The team also created a Board of Director’s handbook to help build a high-performing, working board. They also created a press packet to help media outlets share the story of Inside the Lines. Once these critical structures were in place, the team launched the organization’s inaugural fundraiser with a golf scramble. They assisted with the planning, promotion, and many other action items to ensure the event’s success. The golf scramble raised $10,000 for the organization. Another $1,000 was raised by selling tickets for a Louisville City FC soccer game.

Here’s what Anthony Richardson, co-founder of Inside the Lines Training Inc. said about the team:

“River City Avengers are superheroes. They have wholeheartedly jumped into the progression and development of our nonprofit without hesitation. Since day one they have been dedicated to our success. There couldn’t have been a better group to support us. They have helped develop a model of sustainability, secure funding, acquiring a building to work out of, and the knowledge to be impactful and intentional on our mission and vision to serve our youth to the best of our ability. THANK YOU RIVER CITY AVENGERS!!! ”

Learn more about Inside the Lines Training, Inc. 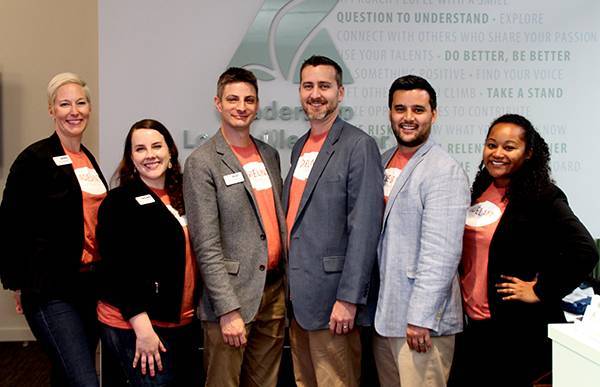 The first phase developed a strategic blueprint for Adelante to implement over the next three years. Through collaborative conversations, Team Ignium and Adelante created strategies for progress for each project objective. Measurable targets and indicators of the blueprint were identified to ensure the sustainability of the growth plan. The plan will be implemented and conclude in 2021.

Phase two included executing a community engagement event called ¡Adelante Despega! which translates to Adelante Takes Off. This event intentionally modeled organizational functions and behaviors needed to achieve the three objectives the team outlined. Kicking off Hispanic Heritage Month, over 200 attendees including students and parents took part in ¡Adelante Despega! to learn about the organization and participate in a Family Olympics Day. The event raised $3,000 in donations and local sponsors provided $3,200 in in-kind gifts and donations.

Here’s what the leaders at Adelante Hispanic Achievers said about the team:

“Working with Team Ignium this year has been a pleasure and a great benefit to Adelante Hispanic Achievers. With their help, we were able to plan, organize, and execute a new, annual community festival and fundraiser coinciding with our first day of Mentoring & Enrichment programs for the year.  We are so grateful for the opportunity to work with our Ignite Louisville team, and thankful for all they have provided us during the last six months.”   – Dustin Bishop

“On behalf of Adelante Hispanic Achievers Board, I want to thank you for making Adelante’s !Despega! festival a huge success. It would not have been possible without the countless hours this team dedicated to prepare, work during the event itself, and clean up afterward.” –  Margarita McAtee

CASA of the River Region, working with Team We Have Ignition 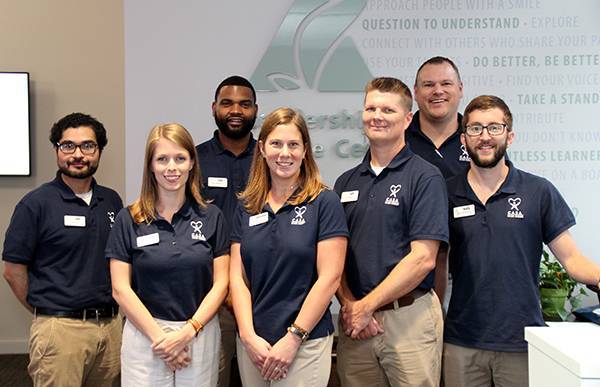 Team We Have Ignition worked closely with CASA to enhance their recruitment efforts for CASA volunteers. The team interviewed, recruited, and developed a Faith-Based Outreach Committee, contacted over 700 churches to spread the CASA message, hosted a 101 informational session and established a strategic partnership with the Louisville Urban League, and made plans to volunteer at CASA events this fall. The team also marketed CASA to several regional religious newsletters and provided materials to over a dozen faith-based organizations. The Faith-Based Outreach Committee has already had two meetings and is actively connecting CASA to a variety of faith-based organizations.  The committee is scheduled to meet monthly with the oversight of CASA’s Marketing Lead. The entire team will remain active with CASA beyond the Ignite Louisville program.

Here’s what Amabelle Camba, Director of Development at CASA said about the team:

“The team itself is made up of amazing individuals. Their persistence and fortitude is the reason they were able to reach out to over 700 faith groups. They used their individual strengths to collectively recruit, interview and establish a Faith-based Outreach Committee. It has been a pleasure to get to know them and to share the important work that we do. We are so grateful for their support.”

Learn more about CASA of the River Region

Fund for the Arts, working with Ignites of the Roundtable 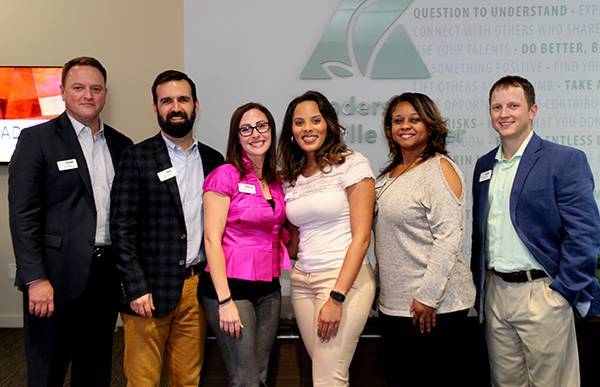 Team Ignites of the Roundtable created a new Fund for the Arts-sponsored program called “Arts Access.” The program’s purpose is to allow every Louisvillian — no matter their income — the opportunity to experience the arts. The team will accomplish this is by providing tickets and experiences to nonprofit partners for distribution to individuals in communities they serve. The program makes use of tickets that go unsold for arts performances since rarely are organizations able to sell out every event. Tickets will cost $2 each to be paid by attendees. Why $2? The team’s research reveals that people are more likely to attend shows that have a monetary value attached to them; free events are often skipped. To further the goal of giving arts access to all, the team has partnered with TARC to provide complimentary rides and nonprofit partners to ensure a well-rounded, comfortable experience for recipients.

Every Louisvillian should have the opportunity to experience arts events regardless of financial constraints, and Arts Access provides that opportunity.

Here’s what Eric Gurevich, Communications Director of the Fund for the Arts, said about the team:

“Ignites of the Roundtable isn’t a collective of thoughtful, creative professionals who are dedicated to making their community a better place to live, work, and play. They are so much more. This team exemplifies humility, honor, courage, and sacrifice. Just a few of a knight’s virtues. We are beyond grateful that these folks had the courage and vision to take a rather vague project proposal and deliver an empowering, inspiring program which will create greater arts access. Ignites of the Roundtable, we salute you!”

Learn more about Fund for the Arts

Heuser Hearing and Language Academy, working with The Super Seven 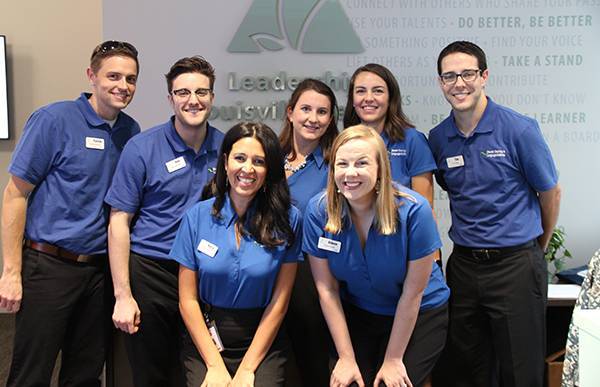 Team Super Seven worked with Heuser Hearing and Language Academy to track down alumni and build a more structured giving circle. Team Super Seven volunteered to gather contact information from many of the school’s alumni, organize events that engage different populations within both the school and hearing institute and expand ways to volunteer for donors and alumni alike. Super Seven also restructured Heuser’s giving arm, the Butterfly Society, to create a sustainable model that would allow for more volunteers to get connected to the organization. The team organized an open house to engage new supporters of the Heuser Hearing and Language Academy and connect with past alumni. After surveying nearly 100 constituents in Kentuckiana, Team Super Seven found that most individuals were looking for the opportunity to donate and volunteer, and that the agency could develop both pieces of the organization. The team also constructed a strategic vision and marketing packet for the Butterfly Society to utilize when engaging new, diverse members.

Here’s what Shannon Kisselbaugh, Director of Philanthropy at Heuser Hearing and Language said about the team:

“Debbie, Pam and I really enjoyed getting to know the Super Seven and working with them. As a nonprofit with a small staff, we would not have had the capacity to conduct the level of analysis and the implementation they were able to accomplish in a short amount of time. I’m also glad that we were able to introduce seven new young professionals to our organization and mission and look forward to continuing our relationship into the future!”

Uniting Partners for Women and Children, working with Impetus 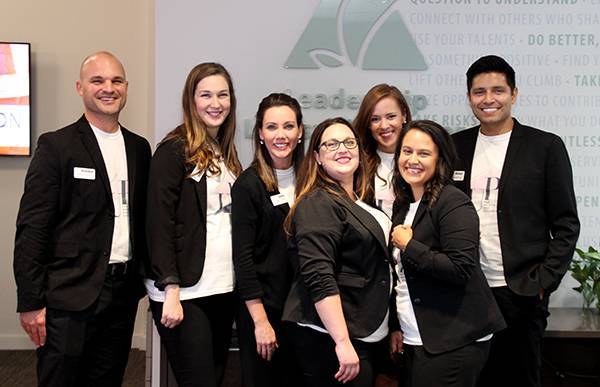 Impetus worked with Uniting Partners for Women and Children (UP), Louisville’s first women’s-only day shelter, to introduce the organization to the community and equip them with sustainable strategies and tools to raise brand awareness; recruit and retain volunteers, and raise funds on an ongoing basis. Brand awareness activities included coordinating a grand opening event attended by news media and community leaders and developing a comprehensive social media strategy that increased the organization’s reach and provided guidance on content and audience engagement. The team also provided UP with a comprehensive, sustainable plan for finding, recruiting, training and retaining volunteers, which the organization relies heavily upon in order to remain operational. From a fundraising perspective, the team developed recommendations for and implemented smaller-scale, manageable fundraising events that can be easily duplicated and executed throughout the year.

Here’s what Amy Meredith, co-founder of UP said about the team:

“As a brand new nonprofit, we were delighted and grateful to open our doors with Impetus by our side! Genuinely invested, they are a wonderfully driven and diversely skilled group who orchestrated a fabulous ribbon-cutting event, managed our social media and organized a successful fundraiser! They helped us see past our immediate needs, focus on sustainability and helped us to solidify things we wouldn’t have been able to manage initially on our own. We look forward to seeing the final results and are extremely grateful for this partnership.  We’re excited to see what the future holds!“

Learn more about United Partners for Women and Children

Nonprofits, learn how you can benefit from Leadership Louisville Center programs