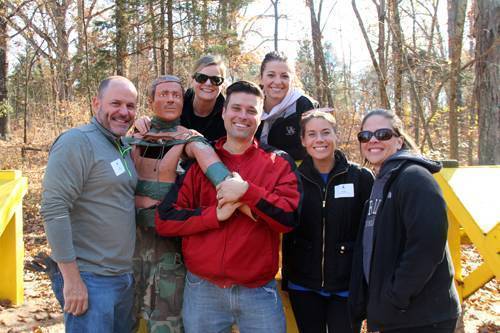 It was a leadership training session like many others, except that it wasn’t.

Over the normal din of an open warehouse space, the presentation being given had to be vocalized over the constant and disquieting staccato of simulated gunfire, shouting, and other noises consistent with the machinations of modern warfare.  A thin barrier was all that separated a leadership session from combat training exercises.  For members of the Spring 2017 Ignite Louisville class, this was an unnerving setting for the delivery of a PowerPoint, but for the members of the US Army Special Forces this was a Wednesday. This was their normal.

For many of us this was not our psychologically safe space of a board room or cubicle. This was the first application of stress on what could have been a fairly pedestrian day of team building.

The purpose of our program day was to receive leadership training from Special Forces personnel at Fort Knox on lessons learned from over 60 years of team building for covert mission execution.  More importantly was for our class to crystallize our ability to  work together in a cohesive team in the crucible of duress.  Being able to focus and work toward a common goal through the fog of simulated warfare, squeezing through a culvert, performing a mad dangle from a 15-foot high wall, or collecting gluteal splinters was our challenge for the sessions and the obstacle course.

When was the last time that you were warmed-up by a Jazzercise Instructor before a big meeting?

How often do you have a business lunch consisting of a McRib patty, turkey snacks, and a pop-tart?

The Ignite Louisville session shattered the expectations of many, including myself. This time the Special Forces Instructors completely won the day.  Never had I met a group of people that were so willing and anxious to contribute their talents and risk their lives in countries – with names that we can’t pronounce – toward the cause of preservation of the American Ideal. It is easy sometimes to paint military personnel in a box because their heavy lifting is happening out of sight and out of mind. These women and men are putting their family life on hold for months and years at times in defense of that Ideal.  In some of the conversations after the session, I was taken aback by the fact that there was some disappointment expressed by staff in being in the safe space of an office, versus serving in a foreign field. These people are heroes and I, for one, am in awe of them.

How we applied our Ft. Knox experience to our Ignite Challenge Projects

In this setting, the six project teams were able to work together through the problems of the course and let the positives and improvement areas of team performance bubble to the surface. What many of us learned is that we communicate well; we trust our teammates to innovate and create in the moment. The big lesson learned is that many of us are very hands-on as leaders that sometimes get too far into the weeds to effectively lead. I was reminded of the story of Donald Rumsfeld immediately after the attack on the Pentagon leaving his office to assess the damage first-hand. While in some respects this is noble, it also meant that at the time of crisis the Secretary of Defense was unavailable for almost an hour. We need to trust our teammates enough to let them lead or to follow within the intent of our mission.

As we march forward excitedly now knowing the non-profit that we will be working with over the next several months we need to hold on to the lessons learned of the day. Spend 1/3 of our time planning in detail, and the other 2/3 doing.  Be able to improvise. Trust each other.  Settle into roles. Control our emotions. Treat one another with dignity and respect.  Pull others up with you – or in the case of Chuck, the army mannequin, pull them up and toss them across the ravine.

We should follow the Special Forces Creed of “De Oppresso Liber,” and provide our non-profits with the liberty from the binding of the fetters in order for them to optimize their service to the community that we love, and make it a better place.  If that happens, all teams in this competition will have won.

Big thanks to General Calloway, Lieutenant Colonel Patrick Tobey, Captain Dave Hermann, Captain Mike Oliveira and all of the Special Forces personnel that made the day so special. And also big thank you to our classmate Chris Staples for his service in the Navy.

Visit the Ignite Louisville web page, reach out to Aimee Jewell (ajewell@leadershiplouisville.org), and she’ll help you determine if this program is a good fit for you:

Schedule a Meeting or Call

Or fill out this form and we’ll get back to you with more information: