Ignite Louisville program day at Ft Knox… not what I expected

Our program day at Ft Knox was not what I expected.  When I heard we were going to be listening to Brigadier General Gayler speak to us about leadership, I envisioned a Jack Nicholson type character from the movie “A Few Good Men.”  I pictured him barking army lingo at us and telling us, “You can’t handle the truth about leadership!”  Instead, he was soft-spoken with authoritative confidence and humorous.  He spoke about leadership with passion and about his troops with admiration and respect.  General Gayler discussed five qualities of leadership beginning with competence.  He told us that you can’t teach competence, however, you have to be competent to be a trusted and respected leader.  He asked us to focus on 3-5 things that we want to do better than anyone else, and challenged us to do them.  He asked us to be visionary leaders, to prioritize objectives, and to have stamina.  While these aren’t new concepts to me, seeing them through the eyes of General Gayler and all of the Officers of the Special Forces who worked with us that day, it was eye-opening and humbling. 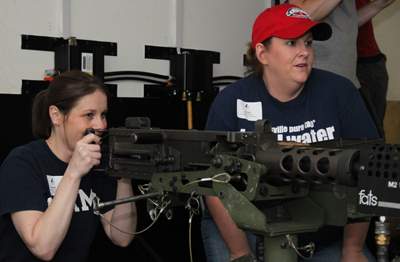 Christy Weikert (right) scans the horizon for enemy combatants and prepares to reload as Nicole Carl (left) takes aim with the M2.

I expected an “Army Strong” and “Go Go Go” type of leadership with a shoot first-ask questions later approach.  However, that wasn’t the type of leadership style that Major Jason Clarke spoke to us about.  While leading my employees in the conference room doesn’t compare with leading troops on the battlefield, it does actually require the same techniques of analyzing, planning, rehearsing, revising, and implementation that he outlined as part of the Army’s Decision Making Process.

I expected an obstacle course that was going to leave me bruised and muddy.  Due to the rain, I instead participated in team activities that gave me the chance to thank each of the Special Forces Officers Rangers and the Green Berets – for their service, and to hear their stories.  I expected that shooting the M-16’s would be empowering and give me a shot of adrenalin and well, that turned out to be exactly like I expected!  So, while the day didn’t turn out exactly as I expected, it turned out to be so much more. It was an experience I will carry with me as a leader in our community and a proud supporter of our United States Military.