Four years ago while working with the Old Louisville Farm Works Market at Walnut Street Baptist Church, I had the good fortune of meeting an extremely kind and thoughtful woman by the name of Marilee Miller who was then the manager of the Old Louisville Farm Works market. While setting up for market one afternoon we were sharing conversation regarding how vibrant and abundant the farmers market scene in Louisville was, when Marilee made the comment that things were not always this way. She described the early efforts, primarily of local farmers, to establish farmers markets and the struggles they experienced due to lack of organization and business acumen. I then learned that Marilee was a Bingham Fellow, class of 1995-96, and that her class had set out to work with area farmers to make their markets successful. This was the first I had heard of Bingham Fellows, and as she described how they reached out to community leaders, to Wendell Berry and to other stakeholders to establish a logical framework for farmers markets I was left with an indelible impression. The Bingham Fellows seemed to personify all that is good about community leadership: tapping the deep talent and commitment that exists in our city to produce tangible and needed results. 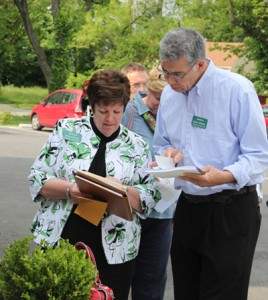 Fast forward to the present: we now find ourselves on the cusp of a diverse and ever-evolving local food economy that is considered one of our city’s most desirable assets. It is a fortuitous time for our Bingham Fellows 2013 class to be working, along with so many other deeply committed individuals, to augment the positive impact of local food upon our community. The prospects of what local food in Louisville will look like three, five or ten years from now are inspiring, even a little dizzying.

To be invited to come together with so many talented and creative people around this topic has been an experience even beyond the high anticipation I felt when my acceptance letter from Leadership Louisville arrived ten months ago. I would like to offer a personal thank you to my Bingham Fellow classmates and to Leadership Louisville Center for having the opportunity to get to know and work with each of you during this exceptional program year.