West Louisville has the highest unemployment rates in the Louisville Metro area, which contributes to the endemic poverty in many of its neighborhoods. There are many job fairs and training programs available to West Louisville residents, but through Bingham Fellows research, it was discovered that information about those opportunities and resources often does not reach those who need it. 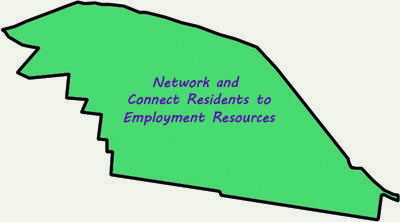 Modeled after the Leadership Louisville Connector Project, We Hire Together will identify a network of on-the-ground West Louisville community connectors to inform West Louisville residents about hiring opportunities and connect them to existing workforce development and other employment resources.

We Hire Together will serve as a communications conduit, lining up key West Louisville community connectors, such as church leaders, barbers, beauty salon owners, community center representatives and neighborhood leaders, to inform job-seekers of the opportunities available. This focused and sustainable grassroots approach can significantly improve residents’ employment potential, and, over time, raise household incomes in West Louisville.

Accomplishing this goal requires collaboration among local employers, workforce development agencies and community influencers. Already, the initiative has a strategic partner and fiscal sponsor in Greater Louisville Inc., as well as key partnerships with KentuckianaWorks, Louisville Urban League, Louisville Metro Office of Safe Neighborhoods and the Interdenominational Ministerial Coalition. The We Hire Together initiative will foster and grow this collaboration, test its effectiveness through a pilot program to begin in November 2014 and, ultimately, create a system to maintain and sustain this communications network.