UNITED WE STAND: A NEW MODEL FOR HOW CITY COLLABORATES WITH STATE

After months of exploration and creative problem-solving, the 2015 Bingham Fellows launched initiatives focused on the topic, United We Stand: A New Model for How City Collaborates with State.  Over 100 government, business & community leaders attended the graduation presentation on Thursday, Oct. 29, 2015 at the Louisville Free Public Library. The thirty-seven community leaders in the class presented four projects that ensure the conversation between city and state leans increasingly towards unity and away from divisiveness, as well as optimizes the relationship between Louisville and rural areas of the state.

About the work of the 2015 Bingham Fellows 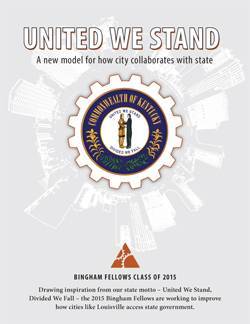 The urban-rural divide has become a national issue of increasing importance, but it’s one that Kentucky and Louisville have been struggling with for centuries. The 2015 Bingham Fellows class was charged with starting the process of uniting the Commonwealth for the betterment of all. Since January, the class has studied the issue through in-depth discussions on the political landscape in Kentucky, candid conversations with current and past civic leaders, and researching successes in other states. Because the urban-rural relationship is such a complex issue, the class concluded there is no one solution to implement real community change. Therefore, they developed four strategies that range from the macro level with broad, statewide considerations, to the micro, grassroots level.

Unite Kentucky is a broad, statewide project to research Kentucky’s urban-rural divide, providing vital information that will serve as the foundation for better collaboration; stakeholders will be engaged to build pro-active coalitions and communication approaches that better speak to communities of all types.

The Common Wealth is a focused statewide partnership with Leadership Kentucky to engage young leaders, business and civic organizations and individuals in strategic conversations about common interests as a way to build relationships and partnerships, ultimately leading to united understanding and action.

LOUIE is a targeted project to improve outcomes in Frankfort on issues important to Louisville voters by better unifying the Jefferson County legislative delegation and improving constituent engagement.

UPDATE: Now known as Cafe Louie, this initiative continues via a series of “Meet Your Legislator” events at Louisville Free Public Library branches. See the latest on the Cafe Louie Facebook page: https://www.facebook.com/CafeLOUIE

Grow Kentucky is a micro, grassroots project to connect young people in urban and rural areas through credit-earning classroom farming projects. Students in Jefferson County will connect with students in Appalachia and gain the chance to build an appreciation for their differences and similarities.