“Be loyal, adaptable and don’t leave anyone behind”

The Ignite Louisville class gathered on December 18th at Norton Hospital for what we knew was going to be a day of learning to lead like a duck. None of us knew what that meant, but as we assembled into the room, we each found a rubber duck at our spot as a reminder of the day’s focus.

While the speakers had very different backgrounds, the common thread throughout the entire day was the importance of collaboration and relationships with others when driving for success.  This was even demonstrated during the tour of Norton Healthcare’s new cancer center as the details of the center were designed around the community it would serve. The center demonstrates and displays a desire to provide the highest level of comfort to those battling disease. 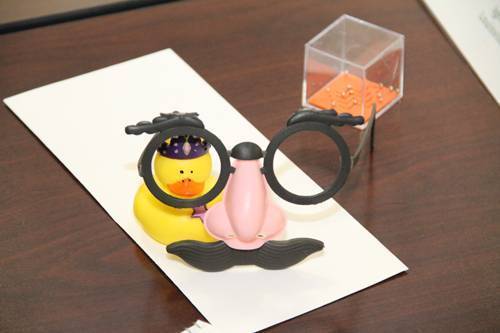 Dr. Lynnie Meyer, Senior Vice President of Women’s & Children’s Community Partnerships & Chief Development Officer, shared the path that brought her to her current role with Norton Healthcare.  While her story involved taking risks and pushing herself outside of her comfort zone, what she highlighted to the group as the key to success was the importance of the relationships she developed. She spoke of the impact when she focused on listening to people as she moved into a new role. She asked them, “if you could wave your magic wand and make changes, what would it look like?” She gained insights that were the cobblestones in creating her vision and strategy for success.  She spoke of a conversation she had when she took over as President and CEO of The Center for Women and Families in Louisville. This conversation was not with a leader in the organization rather it was with an employee who had worked with the organization for many years and saw things from a very different perspective than prior leaders.  Taking that perspective into account as she set her vision proved to be very beneficial.

Tom Kmetz, President of Women’s & Children’s Services and Children’s Hospital, had a much different path than Dr. Lynnie Meyer, but it too it was shaped by the relationships he had with mentors throughout his career.  He highlighted the importance of those relationships and particularly those with people who are very different from you.  Those relationships can help highlight things that you may not ever have seen before, and that ultimately assists in personal growth.  Tom also spoke regarding the importance of accountability – the need to be accountable not only to yourself and teammates but also the community you serve, better known as the customers in his line of work.

The hours spent with Al Cornish involved a deep dive into critical competencies of leadership and the many similarities between how a duck operates every single day to those attributes exhibited by successful leaders.  Some of the similarities? They are loyal, adaptable, they don’t leave anyone behind and are calm on the surface.

Like the other Norton leaders, Al pointed out that ultimately relationships are everything.  Relationships need to be nurtured, and as he stated, we don’t spend enough time nurturing them.

The session with Al Cornish wrapped up with the composition of leadership growth statements and identifying accountability partners.

We left the day with a duck and personal leadership growth statement in hand.  These symbols will be placed in our work spaces as encouragement to lead like a duck and ensure we are striving to be the leader we desire.

Applications are open through February 17 for classes starting in April and October 2017.